Explore through one of the most scenic places in the country on this San Diego tour! On this tour, you will see the city’s beloved landmarks and learn about the history and culture that has shaped the area for years. Not only will your eyes enjoy the views, but you will also get a chance to discover the heart of the city through its rich food scenery!

-Enjoy hotel pick-up and drop-off by your private driver-guide, who will escort you throughout the day.
-Visit stunning La Jolla Cove and enjoy marine life and the bay. Take a photo stop at Soledad Mountain with amazing views of downtown San Diego, Tijuana, MX, and Mission Bay.
-Walk around San Diego Old Town and the Spanish Mission. If you book the morning tour, enjoy a great lunch at one of the authentic Mexican restaurants on San Diego Avenue.
-Learn about Balboa Park, San Diego’s World Fair location. Visit the Botanic Garden and Rose Gardens.
-Visit Seaport Village, and stroll along the city’s waterfront, where you will be able to see the USS Midway.

Your tour finishes with a walking tour in San Diego’s nightlife area, the Gaslamp Quarter. You are welcome to stay here at the conclusion of your tour, or your guide will happily drive you back to your hotel.

In 1867, when Alonzo Erastus Horton stepped ashore from a San Francisco steamer, he trod on land that would, one day, be the heart of San Diego. Awed by what he found, Horton declared it "the prettiest place for a city I ever saw." Since then millions of visitors have echoed the sentiments of this early explorer, the single most influential arrival in San Diego - although not the first to discover its beauty.

Juan Rodriguez Cabrillo claims to have discovered San Diego Bay in 1542, some 200 years before Europeans settled the area. In truth, however, the indigenous Kumeyaay peoples had been living in the area for as long as 12,000 years prior to any European ‘discovery’ with the Southern Californian coastal region’s first Americans, now called the San Dieguito, calling it home in around 9000 B.C. Today this once uncharted paradise belongs to an urban population of around 1.4 million people.

On your fascinating private San Diego half-day highlights tour, you will discover the city’s deeply embedded Mexican heritage and will explore the legacy of San Diego’s place in the Mexican Empire from 1821. You will understand what the American-Mexican war, 27 years later, meant for California and the USA. San Diego’s Italian community, established in Waterfront Park in the early 19th century, has also helped shape the culture of the city with its Little Italy Mercato Farmers’ Market, pizzerias, ice cream parlors, and gourmet food stalls. Unsurprisingly, San Diego is gaining a reputation for its diverse and taste-rich food scene.

On the San Diego half-day highlights tour, you will visit many of the city’s major historical sites, neighborhoods and parks, including Balboa Park, the elegant architecture of the Gaslamp Quarter, the Old Town’s rich culture, and the beautiful coastal stretch of some of San Diego's beaches. Through the local insight of your private guide, you will be introduced to some of San Diego’s lesser-known corners with plenty of opportunities to grab some fabulous photographs of the city’s most picturesque landmarks, be it quaint Victorian streets, bloom-filled gardens, or the stunning cliff-strewn coastline that are home to seals, marine birds, and rugged sea caves.

Inclusions:
- Private guide and transportation throughout the experience.
- Hotel pickup (if centrally located). 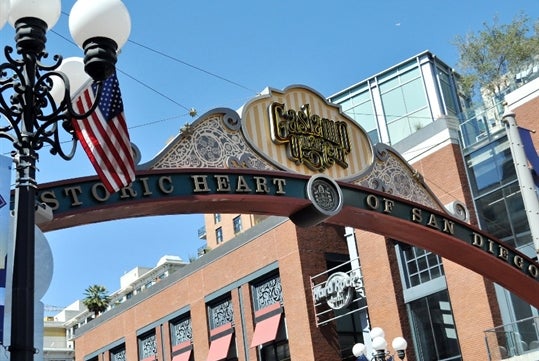 View Map
Back to Top

Where is the meeting point for this Travel Curious tour?

You will be meeting your guide for the Gaslamp Quarter, Balboa Park, and Old Town private driving tour at either the Tony Gwynn Statue (outside of Petco Park), your hotel, or as advised on your e-ticket. Please be at the location 10-15 minutes prior to your tour.

How long is this Travel Curious tour?

What is included in the tour package?

You will be given [INSERT TICKET ADD ONS], a local English-speaking guide, and an expertly guided walking tour. This tour is suitable for [INSERT SUITABILITY] Their tours are all given in English, but numerous guides may speak other languages. Please contact the number provided on the e-ticket to see if they can accommodate any special requests!

What landmarks will we be on the [INSERT TITLE]?

This is a family-friendly, guided walking tour. Transportation is not included in the [INSERT TITLE].

No, but there are multiple parking garages and street parking available near the departure point. One of which is the [GARAGE NAME] which charges according to length of stay, time of the day, and day of the week. You can also contact the phone number on your e-ticket to ask for advice on how to get to the departure point via car or public transport.

Are there any age/physical/health/etc. restrictions for this tour?

This tour is suitable for all ages. All guests must be at moderate physical fitness as the majority of the [INSERT TITLE] will be spent walking.

What should I bring?

Bring your camera and cash on hand for any other purchases or gratuities(optional)!

What should I wear?

How many people are on a tour?

This is a private walking tour and your group! All of their private tours are 100% exclusive, which means that it will just be you, your group and your guide on the tour.

How does Travel Curious ensure the quality of their guides?

All tour guides currently active go through a vetting process in which they carry out interviews, check previous reviews and employers references if applicable. More importantly, they make sure that these guides provide an excellent experience for the guests.

We accept a variety of payment methods for your convenience:

We are here to help:

Don’t take any chances with your trip. Whether you need assistance booking, helpful details for you to be prepared, or need to make a change, our knowledgeable and helpful customer support team is prepared to assist you.

By Phone: 1-888-642-1317
8 AM to 5 PM Central Time 7 days a week
Email Us:
customerservice@tripster.com
Have General Questions? You can view our FAQs for possible quick answers.