Situated in Balboa Park in San Diego, California, this museum offers a unique learning experience for guests of all ages. Explore the natural history of southern California - from past to present - at the San Diego Natural History Museum (The Nat). From rattlesnakes and flesh-eating beetles to gems and fossils to a Foucault pendulum that proves the earth is spinning, there's something for everyone at The Nat. Visitors will be impressed by the unique, interactive exhibitions that span across four floors and stadium-style, giant-screen theater with films that focus on the natural world.

Expedition Baja:
The Baja California Peninsula: our neighbor in nature. Explore towering mountains, desert flats, and isolated islands, and follow along with researchers working to conserve the peninsula’s wild beauty.

Living Lab:
Meet more than 20 of your not-so-cuddly neighbors, from stinging scorpions to elusive nocturnal lizards.

Hidden Gems:
More than 100 stunning objects from our mineralogy department will be displayed on every level of the Museum in this "deconstructed," vertically aligned exhibition.

Fossil Mysteries:
From dinosaurs to mastodons, travel through 75 million years and dig into the rich fossil history of Southern California and Baja California. The fossils on display were discovered locally by our paleontology team during construction projects.

Unshelved: Cool Stuff from Storage:
The Nat has many fascinating specimens in storage that have never been on display—until now. Don’t miss this rare “backstage” glimpse of the Museum’s storage areas.

Extraordinary Ideas from Ordinary People: A History of Citizen Science:
Rare books, art, photographs, historical documents, and plant and animal specimens come together to prove you don’t need to be a scientist to participate in science.

Demonstration Lab:
See scientists at work and learn some of the ways they prepare, preserve, and study specimens.

Science Spotlight: Baleen Whale Evolution:
Baleen whales are the largest living animals on the planet, and their ability to filter and feed on small organisms in the ocean is an astounding adaptation. Scientists have new evidence for how and when the evolution from teeth to baleen occurred in the ancestors of today’s filter-feeding whales.

The Backyard:
Learn and explore the natural world through play. This new space invites our youngest visitors to play under a shade tree, search for hidden secrets along a wooden fence, or read their favorite book in a cozy potting shed.

Skulls:
Take a look at 200 of the weirdest, wildest, and most fascinating animal skulls from our research collection. Mammals, birds, reptiles, and amphibians are on display, showcasing an eye-popping array of horns, beaks, bills, teeth, and more.

Megalodon:
This replica of an extinct megalodon shark was modeled from and inspired by teeth collected from Miocene sandstones in Oceanside, California, and near Ensenada, Baja California by Museum paleontology staff. It hangs in the Atrium as part of Fossil Mysteries and is one of the best selfie spots in the Museum.

Allosaurus:
Meet Al, a member of our skeleton crew. Allosaurus fragilis, a genus of large theropod dinosaur that lived in North America during the late Jurassic Period, is a relative of T. rex, which lived later. Al’s bones are casts made from original fossil bones collected in Utah.

Moreton Bay Fig Tree:
While not officially affiliated with The Nat, many people associate this remarkable Moreton Bay Fig Tree with the Museum. Planted in preparation for the 1915 exposition, this tree is a beloved San Diego icon and one of the largest Moreton Bay Fig trees in the state. With an observation deck, upon which you can rest under the immense shaded canopy of the tree.

Foucault Pendulum:
When visitors enter the Museum off of Prado walkway, they are greeted by the mesmerizing sight of the iconic Foucault Pendulum, which provides visual proof of the Earth's rotation. 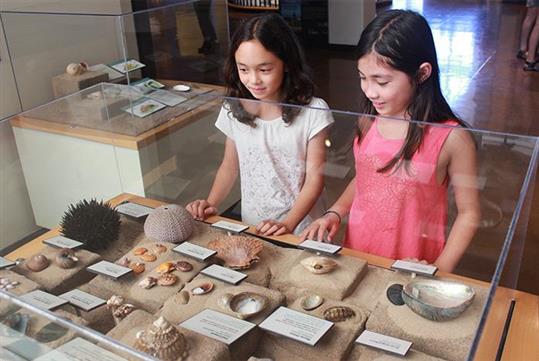 View Map
Back to Top

Is parking available?
You can park in the Inspiration Point parking lot (on the east side of Park Blvd., between Presidents Way and the Balboa Park Activity Center) for easy access to the heart of Balboa Park via the free tram. There are also numerous smaller lots throughout the Park, including the lot next to the Museum's east side, the south Carousel Lot on Village Place and Park Blvd. and the north Carousel Lot.

Do you offer valet parking?
Valet parking is offered in front of the House of Hospitality (and The Prado restaurant) in the Plaza de Panama. There is no valet parking on Mondays.

Is the museum handicap accessible?
The north fig tree entrance to the Museum is accessible. There are six accessible parking spaces in the Natural History Museum parking lot which is located on the east side of the Museum at Village Place and Park Boulevard (to your left off Village Place). There are also four accessible parking spaces in the South Carousel parking lot adjacent to the museum parking lot. The handicap access ramps are located at the northwest corner and the southwest corners of the Museum.

Do you allow pets inside the museum?
No, only service dogs and their handlers are allowed. Service dogs must be on a non-retractable physical leash that is less than six feet in length. Each visitor may only have one service dog.

Does the museum offer assistive listening devices?
Yes, you can request the infrared listening device headsets at the north entrance Visitor Services Desk. The Assistive Listening System is available for lectures and films in the Charmaine and Maurice Kaplan Theater.

Is there any place to buy food?
Located on level 1, the Flying Squirrel Cafe serves an assortment of coffees, teas, wraps, salads, and snacks.

Can I bring my stroller?
Yes, you can bring a stroller. Note: Strollers are not allowed inside the Museum on a Resident Free Day. Park strollers in the designated area outside the north entrance near the Moreton Bay Fig tree.

Does the general admission ticket include the Giant Screen Theater?
Yes, films in the giant-screen theater are included with paid admission.

We accept a variety of payment methods for your convenience:

We are here to help:

Don’t take any chances with your trip. Whether you need assistance booking, helpful details for you to be prepared, or need to make a change, our knowledgeable and helpful customer support team is prepared to assist you.

By Phone: 1-888-642-1317
8 AM to 5 PM Central Time 7 days a week
Email Us:
customerservice@tripster.com
Have General Questions? You can view our FAQs for possible quick answers.